On 26th January, Indian Republic Day, I published a post titled ‘10 Heart Warming Reasons To Be Proud of India’ that talked about things Indians can be proud of.
Next day, a woman left a comment on the post that read ‘This story just makes me so sad & I wonder how much you were paid to put a shine to a country that is so negative to women and girls and they are not safe to even walk the streets.’ She also went on to accuse me of taking money to glorify my nation. She added, ‘Shame on you Womanatics for putting money before facts and writing this fiction. Now you should write a real top 10 of what is it like to be a women in India.’
The comment did offend me. I was repulsed when I read it. The patriotic in me wanted to scream at this woman and make exaggerated claims about my country.
How could somebody, not even an Indian, slam my country on an occasion like Republic Day? 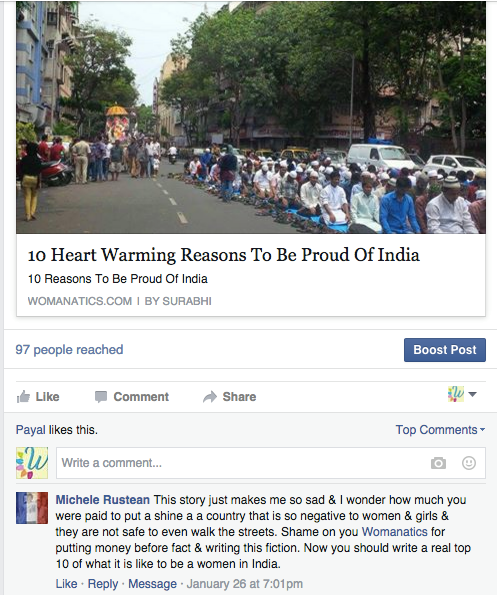 5 BEST Indian TV Ads That Break The Stereotypes of Women

Delhi Rape Case: The whole society has been raped!

Why are we so obsessed with beauty standards?