How many times does it happen that we say something to someone casually and that person takes a big offense? Or that sometimes we say things without realizing how our simple words can affect someone deeply and badly.
The book ‘Thirteen Reasons Why’ by Jay Asher deals with just this concept.

I had once got very upset with my best friend and couldn’t talk to her properly for months because she had something and I found it disrespectful. She kept explaining that she didn’t say it intentionally and that she didn’t mean it the way I took it but nothing gave me respite. I was hurt deep inside. It was only after her apology and after several weeks that I calmed myself down and we got back to normalcy.

After reading Thirteen Reasons Why, that incident popped up in my mind and I realized how words affect us in ways we can never assume them to.

The book Thirteen Reasons Why by Jay Asher is one such book that tells us how our lives are intwined with each other’s and how, unknowingly or unknowingly, we impact others’ lives in more profound ways than we can ever imagine. 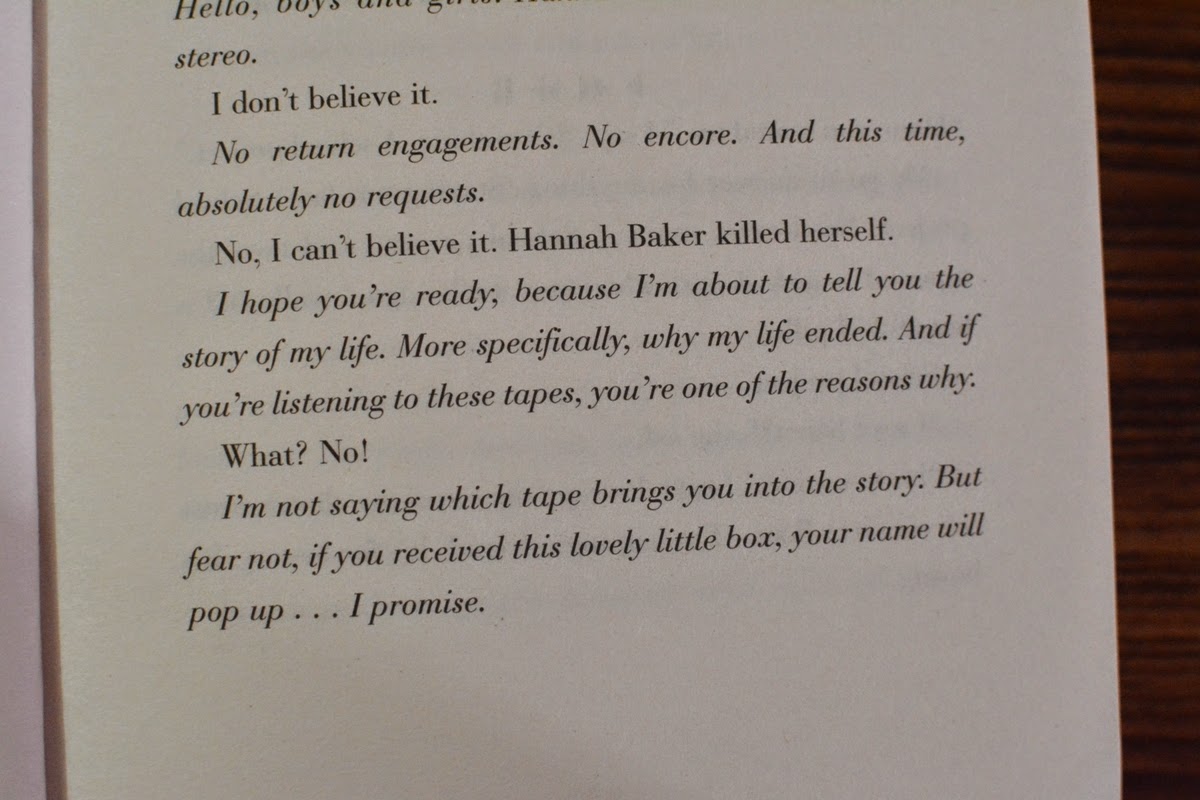 The book is about a fifteen year old young girl named Hannah Baker who commits suicide. Before killing herself, she leaves six cassette tapes in which she records her voice and explains the thirteen reasons why she killed herself. She records the tapes, packs them in a box and gets them delivered to all the people who are responsible for her act, directly or indirectly. Each person who gets the tape has to pass them on to the next person in the list and the chain has to continue until all the names in the list of ‘thirteen reasons’ receive the tapes.

We read the book in the voice of Clay Jensen, a young boy who also receives the tapes from Hannah. He is not sure why he has received the tapes and listens to all of them to find out how and why he could be a reason for Hannah’s death.

Hannah explains all the thirteen reasons for her decision to end her life in the tapes and also talks about her agony and mental pain.

The book takes us through the journey of a young girl in a new school and traverses across the various small yet murky incidents that take place in her life that can mar any young individual and particularly an adolescent woman.

As we begin the book, the initial incidents do not seem to be so grueling only because we know such things happen everywhere. But as we progress further, we find out how every single incident during that time fueled Hannah’s desperation to end her life.

The book does not involve any plot or murder scheme, instead it is the journey of a young girl in a new city, new school that bullies her from the day one. Typically, we expect a teenager book to delve into the topics of competitiveness, body image, job placements, high scores and finding one’s foot in the world but Thirteen Reasons Why looks at the smaller but most crucial aspects of life – friendship, trust and dignity.

In the first few days of school, Hannah kisses a boy who later spreads the rumor that Hannah slept with him and thus is easily available. Another boy then compiles a list of who’s hot and who’s not girls in the class and circulates it. He deliberately puts Hannah’s name in the hot list and writes her best friend’s name in the not list thus creating a rift between the two. 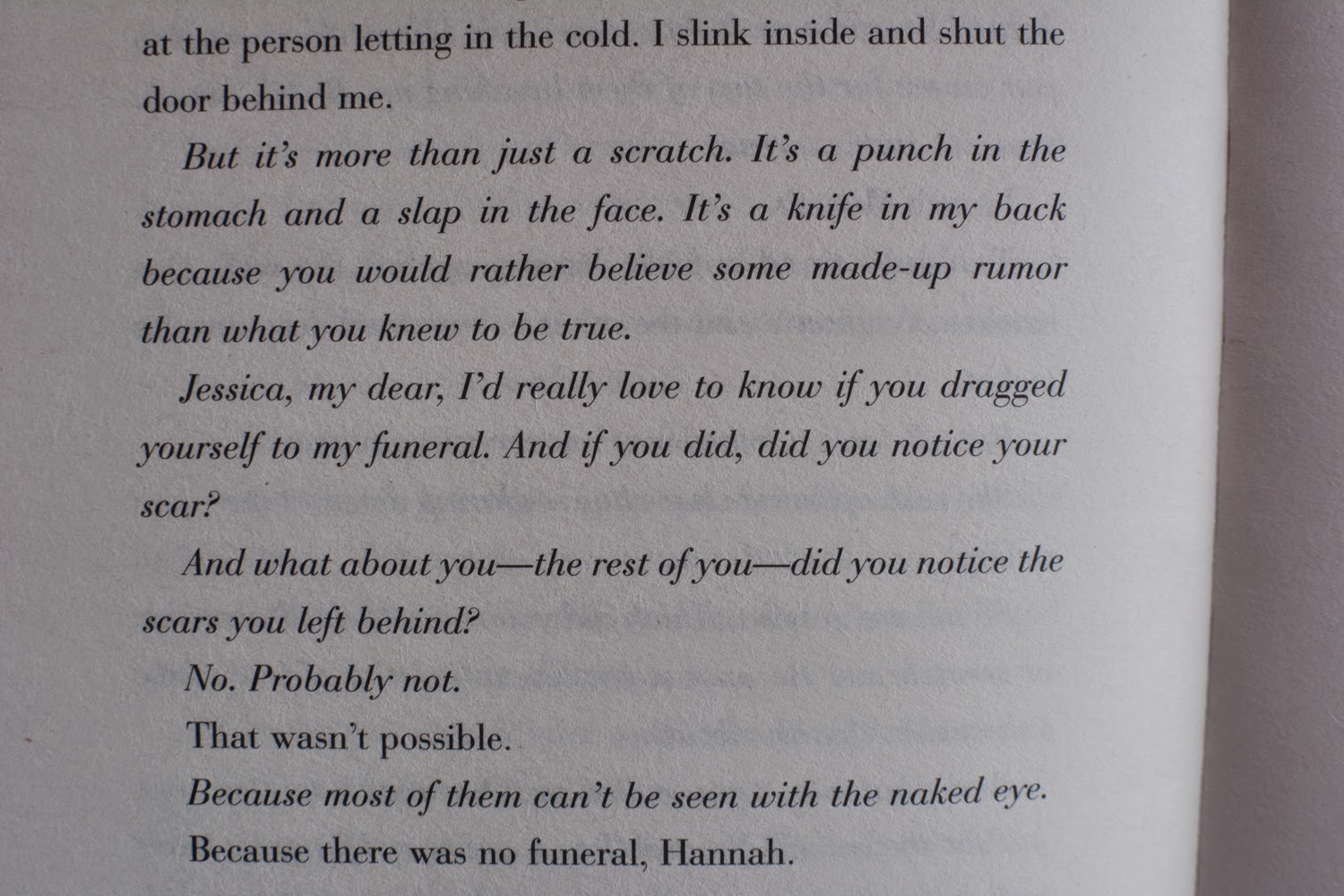 Before killing herself, Hannah decides to seek help and anonymously drops a note about suicide for the prospective discussion in the class. The faculty and the students fail to actually help the note-writer and instead take it as a strategy to gain some attention which deeply affects Hannah.

There are many more such incidents in the book that have prompted her to take such a drastic step. The narrator Clay is also on the list because he tried to help Hannah but he didn’t try enough.

The book is a compelling read. Once you turn over few pages, it becomes hard to put it down. You want to finish it soon to understand what really went inside Hannah’s head.

The language is simple and easy to understand. The narrative is impressive and grips you in way that as you read the book, you imagine Hannah’s character and every person and place she mentions in the tape. 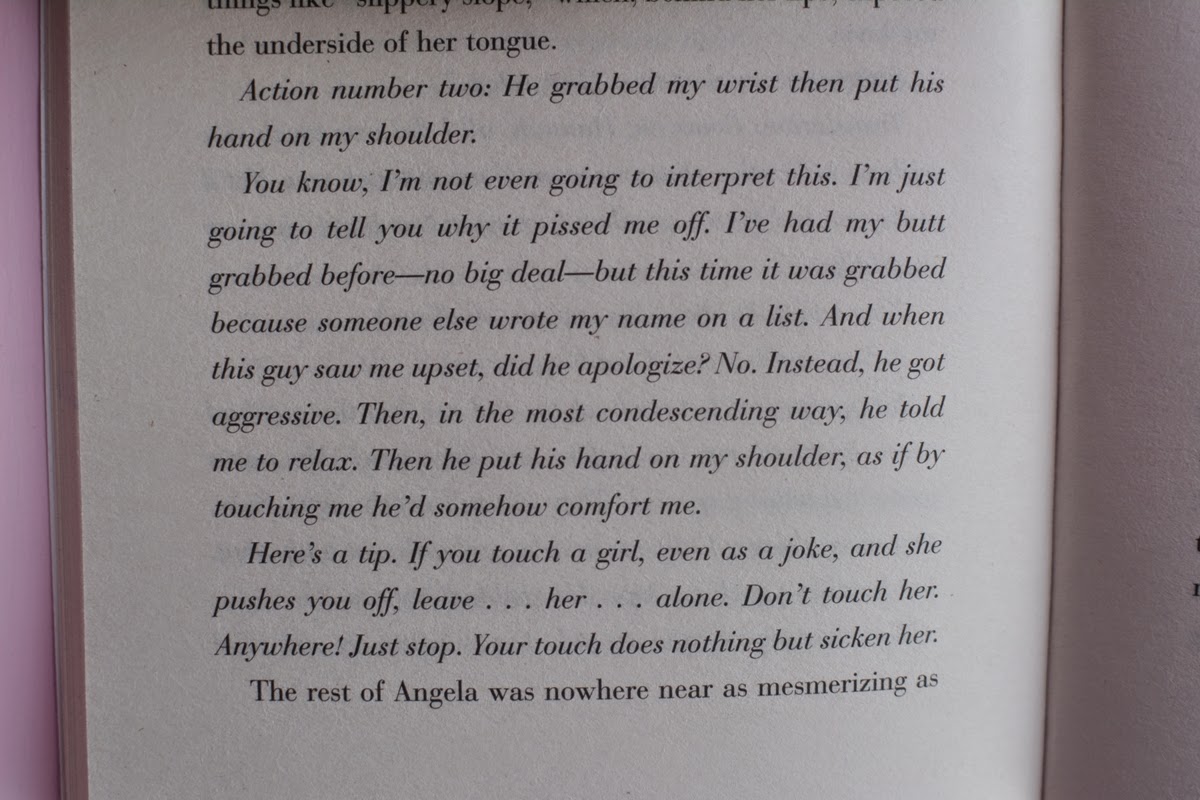 Read it to understand and delve into a young teenager’s distressed state of mind and how several small incidents coupled together to bring her to the state of suicide. Along with this, there are a few times when Hannah herself felt guilty of not being a good citizen, particularly when she meekly watched a drunk girl being raped and an accident claiming a life.

The real change happens in Clay Jensen’s life who is so moved by Hannah’s story that in the end, he goes forward to say hello to a girl named Skye who has been developing suicidal tendencies just like Hannah.

The way Hannah was able to change Clay’s mind and heart after her death, the book also leaves profound effect on its readers.

After reading the book, I went into an introspection state where I looked back at my life and wondered how many times I have hurt others by saying or doing silly things. I also thought about how others have deeply hurt me during school and college. There were students who made fun of me for silly reasons. The guy who once laughed at me when I couldn’t pronounce a word right and the guy who compared my complexion with a fair girl. There were girls who laughed at me (and other similar girls) for no funny reasons. Thankfully I had many friends and a very supportive family, so I never thought about suicide. I was quite happy with life.

But what if I didn’t have good friends? What if I felt utterly alone when I was being laughed at?

On the other hand, I also looked at the way when knowingly and unknowingly I also hurt others. I remembered how, when we were kids, I made fun of my sister once in front of my entire family and she cried a lot later. Now as a grown up, I feel ashamed of my act and can’t even gather the courage to say sorry to her.

The picture below tells how the author Jay Asher got the idea of the book. 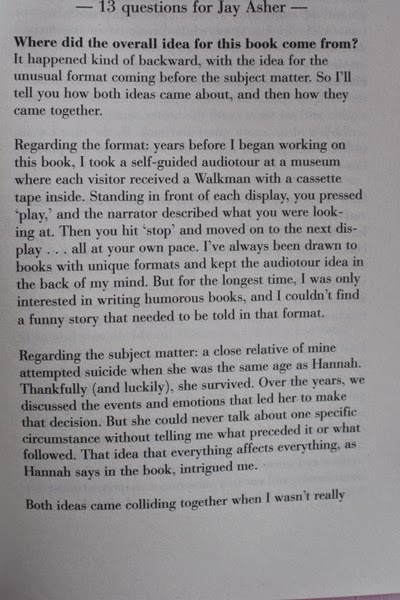 The book has taught me to be a good human being and to think before I speak. I will now take extra care and be more sympathetic towards other people.

The book has taught me many lessons:

Let the book teach us. The medium doesn’t matter as long as we learn to be kind to others. As long as we behave with others the way we want to be behaved with.

I would highly recommend reading Thirteen Reasons Why. It is a must read. It encourages you to be a better person. It changes your mind. It is a must read because it makes you think about those albeit small yet crucial things that we often take for granted.
You may wish to read:

10 Must Read Books For Women That I Love To Read