The thing that I hate about Andamans the most is that there is not a single theatre in Andamans. That is such a depressant for movie buffs like me. I remember how I used to catch most of the first day, first show of the movies in my working days. There was a time when I, along with my room mate, watched one show each of movies like Drona and Kidnap back to back on a Saturday morning. We even had our breakfast in the theatre!

Such was the craze for watching movies and then I landed in Andamans where I can watch a movie only on TV! I really await movie telecasts on TV and never miss a chance. So, yesterday even though we were traveling, I ensured that Zee Cinema was being telecast in that guest house where we planned to stay and I watched English Vinglish last night.

I can not pick any one-word adjective for the movie because it was much more than just a film. And it touched me in various forms than one. This is a film that I can relate to through almost all the characters and not just Sridevi.

The movie is flawless! It is uplifting, witty, serious, touching, contemporary, women-oriented, Indian and over all a beautiful film. I was actually sad that it came to an end. I got so touched and attached with Shashi’s character that I wanted to go through her whole journey and didn’t want to end it.

English Vinglish is about a common woman who cooks awesome food, makes the most delectable laddoos, so much so that her husband once comments that ‘she is born to make laddoos’. Shashi is a woman that most of Indian housewives are – women who give up their dreams and aspirations to bring up their children and settle their families, feed their family members and most of all, never complain.

She has an adorable son who loves her and a daughter who is ashamed of the fact that her mother can not converse in English. In India, a country of 33 different regional languages and Hindi as the national language, Shashi feels inferior and helpless because of English. Her self confidence hits an all time low when she moves to Manhattan to attend or rather make arrangements for her sister’s daughter’s wedding that would take place in Manhattan. With couple of incidents that make her feel crippled because of her inability to speak English, she sees an advertisement that promises to teach English in four weeks. Shashi enrolls in the class and thus begins her journey of self discovery and and a higher self esteem.

Shashi learns English in slightly less than four weeks, makes laddoos for her niece’s wedding’s shagun and falls in love with herself all over again. In the same class she meets a French cook Laurent who says ‘I fell in love with her at the very first sight’. He helps her in catching up with the last few classes and also helps her in realizing her true worth.

English Vinglish struck many a chords with me, at different levels. Most importantly, it brought back so many memories from the past.

Though I was quite sure of my behaviour towards my mum during my growing up schools, I still called her at 11 pm, immediately after the movie and asked her if I ill treated her in any way. As expected, she promptly said that all three of her children, and particularly me, always gave her, her due respect. She went on to add how proud she was to have children like us, and particularly me, who despite her flaws of being less educated and traditional, loved and respected her to the best of their abilities.

I was ofcourse happy to hear this but I still said, ‘mumma, though I think I misbehaved with you deliberately, I am still sorry for having hurt you ever in the past knowingly and unknowingly‘.

Since I watched the movie, I can’t stop to salute Sridevi for a performance that went right inside the viewers and Gauri Shinde, the movie director, for bringing it so poignantly yet lightly that as a viewer I could see myself right up there on the screen! Hats off to these two beautiful women.

I have now added the movie to my list of Must Watch Movies for Women.

Not very often it happens that an actor plays the character with such finesse that we forget the actor is actually not what she is portraying. While watching Shashi in the movie, I forgot that she was Sridevi, I believed that she, the actor, actually did not know enough English. I can now conveniently say that it is only Sridevi who could have played it so well and no one else.

I also got lot of motivation through English Vinglish. I decided that even though I willingly gave up my career for my husband and the baby, I should not let myself go down as the lower I get in keeping myself updated, the more difficulty I will have in regaining my strength. That night itself I told Sanjay that once I move to Delhi, I am going to start working in some form or the other. I do not want to work to earn. I want to work to maintain a bit of discipline in life that helps me in keeping myself aware of whats happening in the world around and not losing the sense of myself. Also, I would want Pahal to grow respectful of me and I personally want to be able to help her in whatever she does. And for the same reason, I would read more and learn about the new things that she adapts to.

English Vinglish also proved that many a times outsiders understand our worth more than our loved one. Sridevi’s niece supports her in attending classes while her own daughter makes fun of her. Similarly, her husband suggests her to quit running her small cooking business, but Laurent, the French cook, admires her for her cooking and assures her it is indeed an art!

It reminded me of how ‘out of the place’ I felt when I went to Netherlands in 2007 for my MBA. Many many thanks to my MBA group that had Eduardo (Mexico), Yu (Taiwan), George (Georgia) and Emmanuel (France). These guys never let me feel lonely, never for a second and were there to make me feel comfortable. I owe a part of my life to Yu as he once saved my life, literally. Emmanuel is my best friend! Eduardo and his wife treated me to lavish Mexican and Spanish food several times and Eduardo heard my woes so patiently while George once called me the kind-est person he had ever met!

I also imagined that maybe one when Pahal grows big, she feels her mum is not updated or maybe she feels ashamed of me too for some inability of mine. For eg, I am so poor at handling gadgets. Maybe Pahal mis-treats me like Shashi’s daughter but then taking wisdom from Shashi’s speech at the wedding, I have decided to in such a case I would have to help myself and that is the reason I have decided to spend time on reading and learning more.

The movie also taught some great lessons about marriage. And these can be summed up in Shashi’s short speech that she delivered at the wedding. She says ‘marriage is about friendship between two people. There will be times when one of the two will feel lesser than the other but in such times do not think that marriage has come to an end. In such times, help yourself. Stand up for yourself. When you help yourself, you can help your marriage as well and your marriage will return to its original state of friendship‘. 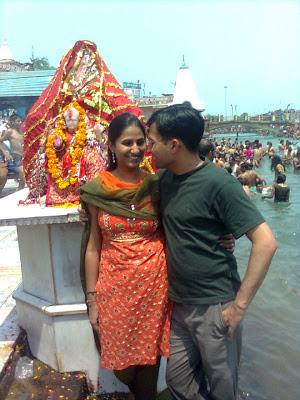 (A candid click from our pre-marriage days, we always have had so much to talk about..)
So rightly said. Marriage is such a strong bond. It does not break with the bumps and the highs and the troughs it experiences. Instead, the partners in the marriage should focus on helping themselves.
One of the touching scenes of the marriage is when Shashi’s niece asks her ‘Laurent really likes you. Do you like him? And its okay. It happens. You can like him’, Shashi politely replies, ‘I don’t need love, I need respect’!
Laurent is another beautiful character in the movie that helps Shashi in loving herself again. He genuinely likes her and they even agree that since they don’t understand their language, it is easier for them to communicate more openly.
True, love does not need language. It just needs a bit of respect!

34 Bubblegums and Candies – book review and a GIVEAWAY!

11 Simple Ways to Develop The Habit of Book Reading: Your Mini Guide To Pick Up Book Reading