Wikipedia describes marshmallow as ‘a sugar based confection consisting of sugar, water and gelatin, molded into small cylindrical pieces.’

Marshmallows haven’t yet found their foot in the over expanded Indian food market. Apart from our own delicious, sugar syrup dipped sweets, Indians love danish pastries and gelato ice creams. We also have ourselves drooling over Choco lava cakes and sundaes. But marshmallows will have to wait for some more time for us to hold them dear to our tongues that our fondest of sweets.

If you ask me – I like marshmallows. Given a choice I may not pick one on my own but if I am offered, I will pick one piece and gobble it down enjoying its bubblegum flavor.

My daughter loved chewing marshmallows and insisted on eating the ones that had a tinge of pink in their color.

‘Mumma, are all marshmallows so soft?’ she asked me one day.

‘Mumma, see we can mould and fold them whichever way’, she said excitedly as she twisted one. 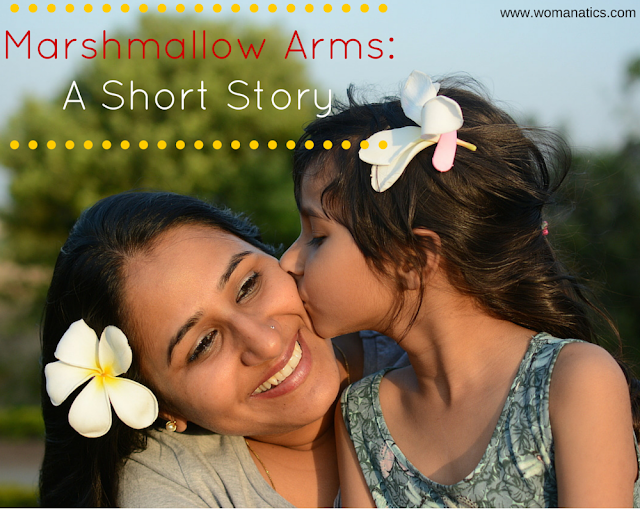 I smiled and handed over the entire pack of six marshmallows to her to relish over the weekend and got back to reading weight loss tips.

Since last few weeks when my body weight increased despite my tedious efforts to reduce it, I spend evenings contemplating ways of losing weight in the fastest manner. I spend hours watching weight loss videos on youtube and reading real weight loss success stories. I wish I could get myself moving instead of getting pleasure in seeing others move.

That evening I got up from the couch and began to walk after one of the videos shouted in exclamation – ‘Move it, damn it. NOW!’

I decided it was enough of ogling at others’ transformation and now I should take action on my body. I dusted my running shoes,  wore them and began walking at home. As part of the walking regimen, I also had to raise my arms and move them up and down in a regular PT like session.

As I followed the video instructions, my daughter eagerly watched me struggling to lose any tiny bit of weight. She was intently watching me move back and forth and my arms raising up and down.

Almost an hour later I crashed on the couch and she jumped on my lap carrying one baby pink marshmallow in her tiny hands. Exasperated I held her in my arms and found her giggles soothing and calming for my tired body.

She picked up my arm, pressed and moved it a little and giggled. Before I could react, she repeated the exercise with another arm.

‘Mumma, your arms are so soft. They are like marshmallows’, she said thinking it was a compliment.

‘What makes you think so?’ I wasn’t so pleased with the comparison.

‘Look here’, she said pointing to the extra flesh dangling from my arms, ‘your ams can be moulded and folded, just like marshmallows.’

She still had a marshmallow in her one hand and my left arm in another.

I looked at both of her hands and realized that it was a fair comparison, much to my indignation.

“As I raised my right arm horizontally, I could see an inverted parabola being formed under my arm revealing the enormous amount of fat stored inside – just like how a marshmallow is packed with sugar and gelatin i.e. fat.”

I could twist the loose muscles like the middle of the marshmallow.

Only saving grace here was that both of them were soft to feel.

One innocuous remark made me realize that I was now a marshmallow girl – a nickname devised by netizens for the chubby women.

‘Do you like marshmallows?’ I asked her.
‘I love them mumma.’
‘Do you like mumma’s arms?’
‘Ofcourse. They are like marshmallows’, and she went back to her sweets.
I picked up one marshmallow from her pack and mindfully ate it. Relishing every single bite. Noticing the flavors. Feeling the tang, the slight pungency. Breaking a bite to test their strength and consistency. Glancing at what lies inside of them.
I have now changed my opinion about them. I think I love marshmallows too.

Dear Daughter, I Will Love You More And Forever

The Magical Yellow Dress: How My daughter And A Dress Made Me Comfortable In My Over Weight Body

In Love Affair With Nature: A Photo Essay

True Story: Born To A Deaf and Dumb Mother