Yesterday, I watched two cult movies. I wanted to watch both of them for a very long time and finally did so yesternoon. I will review both the movies for you here and take you on a virtual movie screening.
Though both the movies are masterpieces in their own ways, one movie that touched my heart more than the other is ‘Maria full of grace’. It is a Spanish movie that has been filmed in Ecuador and shows the life of a teenage girl in Columbia.
The film revolves around Maria, a seventeen year old girl in Columbia who de-thorn roses at flower plantation. She supports her family that has her, her grandmom, mom, elder sister who is a single mother and her infant baby. Maria’s boy friend is Juan who is a plain guy unlike Maria who is filled with energy, passion and a head of hers! 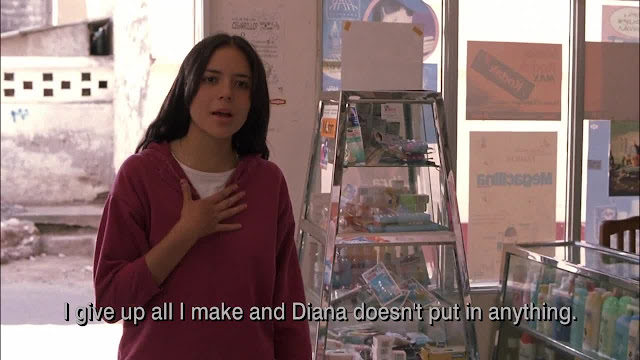 Maria gets into a verbal spat with her boss and quits her job. Her family, particularly her sister, vehemently disapprove her decision but Maria is sure she does not want to get back. She now discovers she is pregnant and when her boyfriend Juan proposes to marry her, she refuses because she is convinced that he is marrying her dutifully and not out of love for her, also she has now realized that she also does not love him.
She ‘quits’ him as well and is now on her way to find a job in the nearby city. She meets Franklin, a friend, who offers her a job of a mule – to transport drugs from Columbia to USA. Maria agrees to become the mule and take on the risks of her body. To do the job right, she has to swallow drugs packed in rubber packets and carry them to the US inside her stomach where she would shit them out. The more she carries, the higher the money she gets. She is aware that even if a single pellet breaks up in her stomach, she could die of overdose.
On the way she meets Lucy, who is a mule herself and carrying drugs for the third time. She ‘explains’ it all to Maria and even tells her that she decides to be a mule as it is a way for her to meet her sister in the NY who Lucy loves a lot. Maria’s best friend ‘Blanca’ also joins her as a mule lured by the money that she is going to get.
Maria is held by the custom officers at the airport who suspect she might be carrying swallowed drugs. Maria confidently defends herself but they are still doubtful and ask her to sign to authorize them to x-ray her. She agrees but since she is pregnant, they can’t do x-rays on her. She is let out.
All the three mules – Maria, Lucy and Blanca, are help hostage in a motel where they have to shit out the pellets. Lucy has been complaining of ‘not feeling well’ since the time she boarded the flight along with Maria. Maria asks the drug workers to find a doctor for her but the witless characters reply ‘as if we care!’
In the midnight, at the slam of the door, Maria wakes up and finds out that Lucy is missing and that the bath tub stained with blood. It does not take long for her to understand what happened to Lucy and she now collects all the pellets and runs away to New Jersey along with Blanca. Maria knows Lucy’s sister lives in New Jersey and she has her address so they both ask Carla, Lucy’s elder sister, to give them a place to stay.
Carla takes them to Don Fermando, a Spanish man who runs a consulting service to help Columbian immigrants to help them find a job or a place to stay. Maria confides in Don and tells him about Lucy and seeks his help to find out about her. A day later, he informs her that Lucy’s body was found with a crude long slit through her stomach. The co-workers had cut her stomach open to get the pellets from her body.
Maria and Blanca decide to return the pellets to the workers, collect their money and Maria gives $2500 to Don to pass on to Carla so that she could arrange for Lucy’s body to be sent to Columbia.
In the last scene of the movie, Maria and Blanca reach the airport and are about to board the flight, when Maria turns back and does not board her flight back to Columbia.
I have seen many Hollywood movies on drugs but most of them involve action, murders and lot of blood shedding. This on the other hand shows emotion shedding.
Maria is just of seventeen though to be recruited as a mule, she tells she is eighteen but she clearly knows what she wants. Her best friend Blanca is exact opposite of Maria. She does not have any opinion of hers and simply follows Maria everywhere so when at the airport, Maria refuses to catch the flight, we expect Blanca to stay back too but Blanca goes ahead.
Maria full of grace is a story of humans, emotions and willingness to work more than just being the story of drug trafficking. One very extra ordinary thing that strikes me about the movie is that we see Lucy dying and her body being slit apart despite her warning of feeling unwell, we can’t come to hate the co-workers. The old Columbian man who brought Maria into this business and who also employs Lucy is also not hated because when before taking Maria into this business he gives her some money to help herself financially and so she could take a decision on her own and not under any pressures.
Maria desperately needs money and hence becomes a mule but when she gets the money, she send half of it to Carla to help her sister’s body sent back to her home land.
Catalina Sandino Moreno debuts through this movie as Maria and not only she is breathtakingly beautiful, she has acted perfectly throughout the movie. She moves me. I am amazed by her character that has spunk and spontaneity. For example, she is making out with her boyfriend when he asks her where they should go to make love and she looks upwards and asks him to come to the roof top of the building under construction. She climbs up but he does not and leaves.
This is the movie of a woman who knows what she wants, how she wants and why she wants. I give it a A+ and would call it a Must-must watch! I am also including it in my list of must watch movies for women.