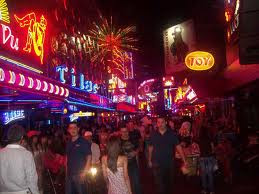 Last night I watched an episode on NatGeo that not only shook my mind but also sent a chill down the spine of my soul. Not that I was not aware of such practices earlier, but sometimes few ‘known’ things touch you in way that it seems you learnt about them for the first time.
The episode was centred on the city of Bangkok, Thailand and the grotesque practice of human trafficking in the country. It showed how with the dusk, one can spot legions of women scantily dressed near hotels and pubs who say they are ‘available’ for few hours for as less as 1500 Bahts. It also showed how women were trafficked from almost all over the world and particularly from India, Uzbekistan, Russia and rest of Asia; how these women once trapped can not leave Thailand as their passport and other documents are seized by their pimps or ‘agents’. If ever they try to leave, they are badly beaten, thrashed and even murdered.
Being killed is better than being in this profession, many would proclaim. But most of these women are divorced and have small, young children to take care of. If they die, their children’s future also dies. And I can totally understand that because now, after having my daughter, I wish to live longer. I want to live for her, to be with her, to protect her for as long as she lives.
The program mainly covered the statistical and legal aspects of the crime but I could not stop thinking about the moral and the emotional aspects. An Indian ‘prostitute’ was once featured on the show ‘Zindagi live’ on Indian TV and there she admitted of handling 8-10 clients in a day!
I remember how dead I felt when, around 10 years back, a drunk old man sitting next to me in the auto touched me twice. I ignored it at first thinking maybe it was the bumpy road but when it happened for the second time, I angrily looked at him and he instead gave me dirty looks. Thankfully, I was brave enough to get down from the auto that very moment and reported it to the driver who pulled that old man out of the auto. That incident had shaken my respect for the elderly forever.
This was clearly not the first and the last incident of its kind in my life. Lives of women in India, particularly in northern India, are full of such grimly, dreading incidents where men pounce upon the women as if they were an object of lust. Why as if here..? Men actually treat women as objects of lust.
What left me aghast last night was that half of these women in Thailand or in India for that matter, are pushed, forced and sunk in this profession which is given a little glorified name in US – The Escort Service.
I could not bear the mere touch of an unknown man, I totally understand the plight of a woman who has to feel, hold and insert the entire log of manly flesh on her body, without her consent, without her likes and without her participation. At one hand, we have an act that gives women the right to deny sex even to their husbands but at the other hand, we have many same, equal women who have to ‘live’ on it even if they loathe it to death.
This is like being soaked in lust, greed, flesh, slavery, hatred, anonymity and the alike. Soaked without consent. Soaked without right. And soaked without oxygen.
When Indiblogger asked ‘what do you think when you hear the words – Soak No More’, I immediately thought of breathing. Of being able to wishfully, willfully breathe! I thought of being freed, being able to live and being able to come up to the surface. Soaking to me means buried. Bullied. Curbed. And strangulated. It does not matter what you soak in.
Soaking in water results in lack of oxygen and consequently death. Just the way, soaking in forced sex or in sex without consent results in death – death of a woman.
I pleaded.
I cried, I wept.
I knelt down.
But you were adamant.
I asked why me?
You laughed.
You moved ahead,
I stepped back.
till you clutched me
like a worm
in a vulture’s claws.
You were merciless,
I became hopeless.
And finally,
you beast,
you tore me apart,
damaging my body
but killing my soul!
Every time a woman is raped or sold or forced upon, the woman in her dies.
Vibrating molecules in the new Surf Excel Matic penetrate deeply embedded stains and remove them effectively without any soaking. I hope and pray that one day, we have such vibrating, thoughtful molecules or human mind cleansing agents that penetrate deeply in our societies and remove even the deeply rooted evils without any kind of soaking.
I would like to end with this quote from Victor Hugo
“We say that slavery has vanished from European civilization, but this is not true. Slavery still exists, but now it applies only to women and its name is prostitution.”

My Story, My Life: The Choices That I Made