Over the years, movies and their characters have become fashion icons and fashion inspiration for people. Hollywood goes an extra mile when it comes to making its characters look fashionable and fashionably different.
Here are the Top 10 Fashionable Characters From Hollywood Movies. 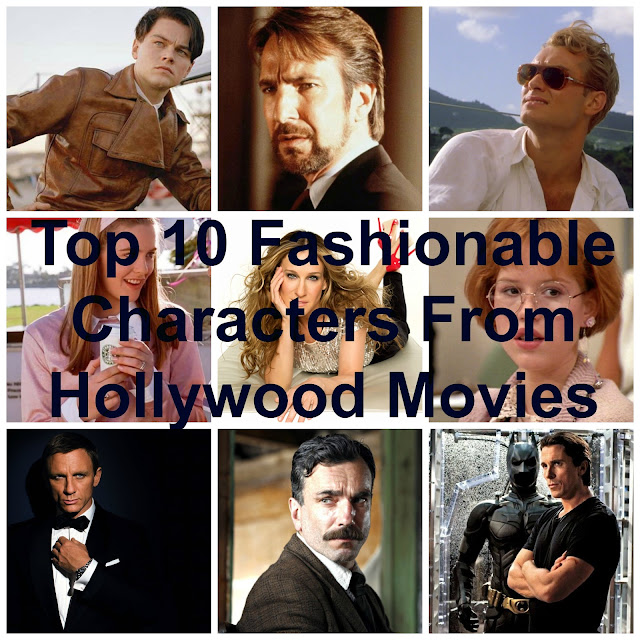 Daniel Plainview in ‘There Will be Blood’
While this particular character’s emotional state is questionable, his taste in fashion can not be questioned. His windfall bought him quite the tasteful wardrobe.
Howard Hughes in ‘The Aviator’
Leonardo DiCaprio portrays the billionaire who was known not only for his interest in aviation but his high sense of style as he charmed numerous Hollywood starlets.
Cher Horowitz in ‘Clueless’
In this role, Alicia Silverstone’s character set off a fashion trend with her ensembles in this movie. Her ability to accessorize also gained her notoriety.
Bruce Wayne in ‘The Dark Knight’
Batman is probably best known for his super hero suit. However, when in the character of his alter ego, Bruce Wayne shines in Armani suits.
Carrie Bradshaw in ‘Sex & the City’
Probably one of the most stylish characters on the silver screen. Carrie has a love affair with shoes and struts around in the finest like Louboutins and Manolos.
Dickie Greenleaf in ‘The Talented Mr. Ripley’
Dickie’s unique style combines European comfort with American prep. A fine example of how to look fashionably appealing in the most effortless way.
Hans Gruber in ‘Die Hard’
A well-dressed terroritst, Gruber sports suits made by John Phillips of London. One of Alan Rickman’s most memorable performances to say the least.
Andie Walsh in ‘Pretty in Pink’
With her love of vintage clothing and affinity for the color pink, Andie Walsh had her own eclectic style that was replicated by teens following the release of this 1986 film.
James Bond in ‘Casino Royale’
Always fashionable, James Bond (Daniel Craig) rocks a stylish tuxedo as he is pitted against an evil terrorist in a high stakes poker game. Although some viewers may not also mind Bond simply lounging around on his phone and enjoying a quick casino game at Jackpot City from sites like Mobile Casino Canada either. We’re sure that Bond can pull off anything at anytime.
Derek Zoolander in ‘Zoolander’
In this movie, Zoolander exudes a one of a kind style with interesting combinations such as neon colours, leather, snake skin and feather. A sequel to Zoolander is expected to be released in 2016.
Will Derek Zoolander further add to his fashion accolades? Only time will tell.

English Vinglish: Much More Than Just a Movie